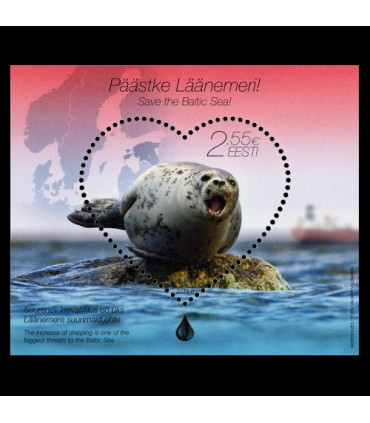 The Baltic Sea is an inland sea of the Baltic Ocean, which surrounds Estonia from the north and the west. The other countries of the Baltic Sea are Latvia, Lithuania, Poland, Germany, Denmark, Sweden, Finland and Russia. The Baltic States are developed industrial countries and the settlements’ and industrial enterprises’ effluent flow into the sea from large areas. A lot of nutrients used in agriculture and forestry flow into the sea and as a result of this the coastal and maritime flora has started to thrive out of proportion. For many organisms it is difficult to adapt water that contains a lot of nutrients and as result they fall ill and finally die. Recently "flowering of the water" or mass gadding of the blue green algae has increased. The biggest amount of toxic substances build up at the end of the feeding chain. Seals, who mainly eat fish, are at the end of feeding chain and due to the environmental toxic substances numerous female animals have lost their power of breeding. The intense maritime traffic on the Baltic Sea is a great source of danger, accounting for nearly 15 percent of the maritime traffic of all the seas of the world. One of the channels of pollution is nitrogen that gets into the maritime environment due to the exhaust gases of ship traffic. More environmental-friendly fuels and technologies would reduce ship effluents by up to 80 percent. General growth of ship traffic and explosively increased transport of crude oil additionally bring considerable danger of a collision of tanker ships. Many oil tankers moving on the Baltic Sea are still single-bottomed as before. During the past twenty years there have been dozens of accidents involving ships and oil pollution. Oil pollution on the seaboard can preserve for decades and its most visible consequences are oil on the surface of the sea: birds and seals suffocate and the opportunity that they do not die is reduced by the deterioration of their movement. But purposeful protection makes it possible to keep the Baltic Sea relatively clean and viable, to preserve the versatility of to its natural environments and to restore the quality of the environment and of the waters.