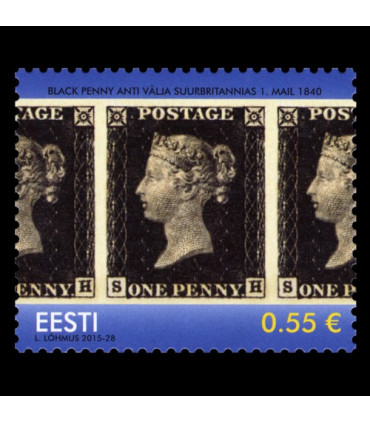 175 years since the publication of the first postage stamp

175 years ago the first postage stamp was taken into use in England, and is called by its old name until today. The Black Penny as the one penny postage stamp was printed in black. The Black Penny was issued on May 1, 1840 and became effective from May 6 as part of the postage system reform; two days later a blue tuppence postage stamp was added. At the proposal of the winner of the postage stamp competition, Benjamin Cheverton, the portrait of the 21 year-old Queen Victoria who had ruled three years by that time, but ruled still over 60 years old and so the Englishmen saw their queen still as a young lady on postage stamps. The first postage stamps were printed at the printing company Perkins Bacon & Petch without indentation in sheets of 12 by 20 stamps and until today the name of the country is not printed in the stamps issued in Great Britain.