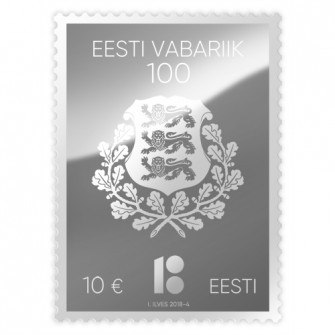 Centenary of the Republic of Estonia silver stamp

On 24 February 1918, the “Manifesto to the Peoples of Estonia”, assembled by the Estonian Provincial Assembly, was printed in Tallinn and it included the following statement: In this hour, the Estonian National Council, as the legal representative of our land and people, has, in unanimous agreement with Estonian democratic political parties and organizations, and by virtue of the right of self-determination of peoples, found it necessary to take the following decisive steps to shape the destiny of the Estonian land and people. Estonia, within his historical and ethnic boundaries, is declared as of today an independent democratic republic.” The manifesto had been read out to the public already a day before – on 23 February in Pärnu. With this independence manifesto, the Estonian people had practiced their right of national self-determination and the independent Republic of Estonia was born. The postage stamp will be issued to celebrate the 100th anniversary of the Republic of Estonia.