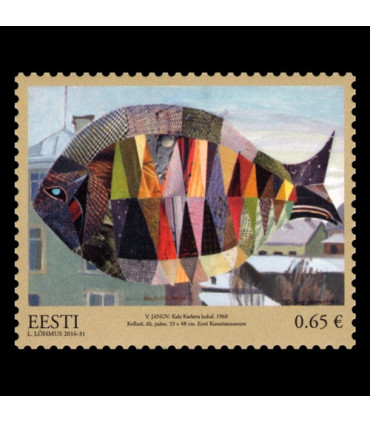 Art - From the treasury of the Estonian Art Museum

Valve Janov (1921-2003) who in the second half of the 1940s belonged to the progressive-minded young artists studying at the Tartu State Art Institute was one of the first in Estonia who dared to experiment with abstract art. She made her first abstract works as early as in 1958. When the authorities closed down the exhibition in 1960, Janov's favourite motive became the turbot whose patterned back made it possible for the artist to continue dedicating to shimmering colour and form. "Fish above Karlova" (1960) is Janov's most fascinating work in which the artist has a view of Karlova and has added to it a dreamy collage fish in the collage technique. It was in that part of Tartu where most of the circle of friends lived and worked there and often their experimental works have been also called Karlova vanguard.