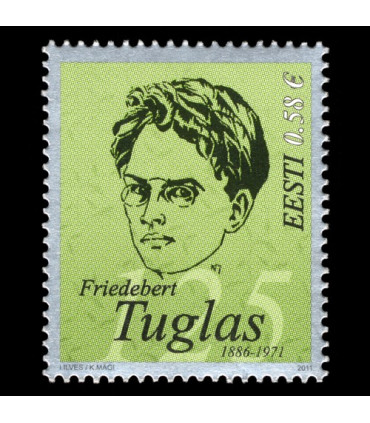 Friedebert Tuglas (Mihkelson until 1923, b. 2 March 1886 at Ahja, d. 15 April 1971 in Tallinn) was a writer, critic and translator, who had a leading role in the literary life of the country. He took part in the Russian Revolution of 1905 and since 1906 lived as a political refugee in Finland, Paris, St. Petersburg, Germany, Belgium and Switzerland; since 1917 in Tartu and from 1944 in Tallinn. He was founder of the Siuru literary society, instituted the journals Odamees, Ilo, Tarapita and Looming, was chairman of the Estonian Literary Society and member of several foreign literary and cultural societies and councils. He wrote psychologically tense impressionistic and neo-Romanticist prose, and thanks to his critical writings was one of the most influential trendsetters of new prose. In 1970 he established the Estonian Union of Writers’ short story prize. His house-museum in Tallinn (est. 1971) is now, since 1993, the Under and Tuglas Literature Centre.